Application of geometallurgical methodology for Porphyry copper project development Porphyry copper deposits are very complex geologically and exhibit great variability in both their grindability (or hardness) and their metallurgical performance. This complex and variable nature of the lithology / alteration and mineralisation of the porphyry deposits leads to the variable metallurgical response. For the development of a strong and robust project feasibility study for porphyry copper deposits, it is critical to apply geometallurgical methodology and study the variability in the deposit – to optimise the exploitation plan, and to improve yearly production forecasting.

The geology of a porphyry Copper deposit is described here (source - Wikepedia) and the attached cartoon picture is from USGS Porphyry Cu deposits description.

Porphyry copper deposits are copper ore bodies which are associated with porphyritic intrusive rocks and the fluids that accompany them during the transition and cooling from magma to rock. Circulating surface water or underground fluids may interact with the plutonic fluids. Successive envelopes of hydrothermal alteration typically enclose a core of ore minerals disseminated in often stockwork-forming hairline fractures and veins. Porphyry orebodies typically contain between 0.4 and 1 % copper with smaller amounts of other metals such as silver and gold.

The first mining of low-grade copper porphyry deposits from large open pits coincided roughly with the introduction of steam shovels, the construction of railroads, and a surge in market demand near the start of the 20th century. Some mines exploit porphyry deposits that contain sufficient gold or molybdenum, but little or no copper.

Porphyry copper deposits are currently the largest source of copper ore. Most of the known porphyrys are concentrated in: western South and North America and Southeast Asia and Oceana - along the Pacific Ring of Fire; the Caribbean; southern central Europe and the area around eastern Turkey; scattered areas in China, the Mideast, Russia, and the CIS states; and eastern Australia. Only a few are identified in Africa, in Namibia  and Zambia; none are known in Antarctica. The greatest concentration of the largest copper porphyrys is in Chile. Almost all mines exploiting large porphyry deposits produce from open pits. 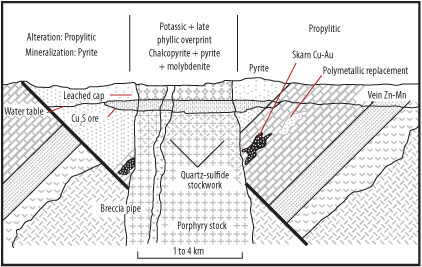 There are a number of aspects of the porphyry copper deposit type geology that drive metallurgical response. For grindability, a  matrix of lithology and alteration, together with the macro and micro fractures in the rock, are the parameters that drive the relative breakability of the rock. Extreme variability in hardness can be seen in deposits as indicated by grindability index test work. An example , for a North American porphyry copper deposit which has done extensive grindability test work, is given in the Table below.

Armed with knowledge of the hardness variability in a deposit it is possible to come up with the most appropriate comminution circuit flow sheet design considering the variability and other project constraints that may exist  (such as strategic mine plan, equipment constraints etc). Then, having established the desired comminution circuit flowsheet the mine blocks can be run through the `virtual process` to show output as both throughput and product grind size. This approach is now routinely used.

For each of these parameters discussed above, it is common to see often significant variability across the whole deposit which will result in notable variance in metallurgical performance throughout. It is therefore very important from the perspective of project design and economic modelling, to capture this variability in project development studies. The way to do this is by applying geometallurgical methodology to the overall project development process.

The geometallurgical methodology consists of geologists and metallurgists coming together to, firstly, understand the geological formation and the various sub-domains that exist in that deposit. Next, it is important to quantify the total expected resource contained within all of the significant sub-domains of the deposit and then armed with that select samples that reflect each of those sub-domains and their relative expected tonnage. Finally, it is important to have sufficient samples from any one of those sub-domains to properly quantify that sub-domains metallurgical performance (as a guide – a minimum of 10 samples for any particular sub-domain is recommended).

In the case of a porphyry copper deposit – because of their geological complexity it is often common to see hundreds of samples being required to properly conduct a thorough geometallurgical investigation for the project development (particularly to feasibility study level).